You have just got home from a tough training session. Prior to tonight’s training you were feeling pretty good about your BJJ game. You have been progressing nicely, starting to control and tap some of your less experienced training partners. You feel you are starting to get a hang of this BJJ thing. Until a wrestler showed up to your class. The wrestler with no BJJ experience was able to completely dominate you and it felt like you were a day 1 white belt all over again. Now you want to know what happened? And how to ensure it never happens again? Not to fear we will breakdown exactly what you can do to counter those pesky wrestlers.

How To Choke A Wrestler? Wrestlers are not use to defending against chokes as they are explicitly banned in wrestling. This results in new wrestlers when they first start training BJJ leaving their necks exposed.

The best way to choke a wrestler is when they shoot a head outside single leg and they leave their neck open. When they do this quickly snatch a guillotine, fall to your back and either establish closed guard or place one of your legs across their back to prevent them rolling through the position. Go for a high elbow finish and within seconds that tough wrestler who was previously giving you fits will be tapping. Another a great way to choke a wrestler is by using a triangle choke. Wrestlers will often attempt to pass your guard head first. Wrestlers are so use to using their head as a weapon to control their opponents that they will continue to use it in BJJ even though it can get them into trouble. By using their head to pass wrestlers will often drive straight into your triangle.

When you are rolling with a wrestler bait them by loosening your guard and giving them the illusion they will be able to pass your guard. As they start moving head first wait for the perfect moment to throw your hips up and lock up that triangle. Be careful when trying to submit a wrestler with a triangle as many will attempt to stand and slam you. You need to immediately cut an angle so you are looking in their ear to make the choke super tight and hook their leg so they can’t stand up. If you follow these tips you will be triangling all the wrestlers in your gym in no time.

How To Leg Lock A Wrestler?

Should You Pull Guard Against A Wrestler? 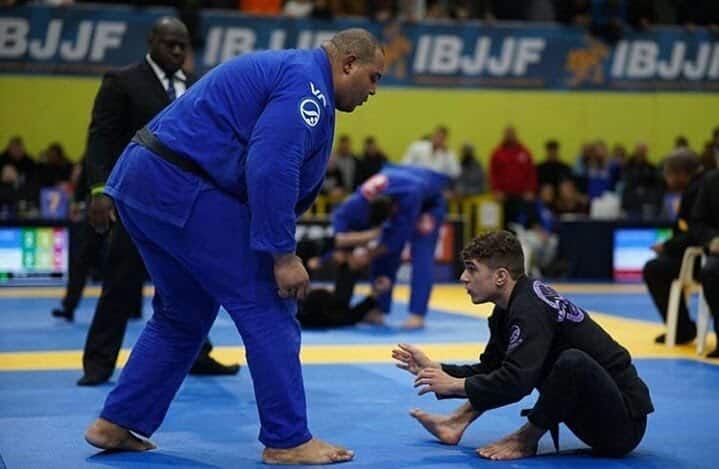 Yes, you should pull guard against a wrestler. If you attempt to stand with a wrestler you are placing yourself at an immediate disadvantage. Why would you voluntarily engage your opponent’s strength. By standing with a wrestler they will likely take you down, scoring two points and will often land in a dominate position such as mount or side control. You do not want to start a match down 2 points with a wrestler pinning you in side control. Your chances of victory will have shrunk greatly.

Instead start the match by pulling guard. Establish your strongest guard and start working for sweeps and submissions. By pulling guard you will take the initiative and get to start the match in your position of choice. You will also be able to catch the wrestler off guard and use an element of surprise. The wrestler will be unsure what sweeps and submissions you will be attacking and this will give you an advantage.

Pulling guard also allows you to easily enter the legs of a wrestler. Wrestlers are very susceptible to leg locks as they are prohibited in wrestling. Wrestlers do not understand how leg locks are set up and do not know how to defend against them. By pulling guard you can quickly enter a wrestler’s legs which can provide you with a quick and easy path to victory.

What Positions To Avoid Against A Wrestler? If you stand with a wrestler you will most likely be quickly taken down resulting in the wrestler scoring two points against you and you will likely land in an inferior position such as side control where it will be very difficult to escape a wrestler as they are also experts at pinning.

When competing against a wrestler you need to be careful about being flattened in your guard. Wrestlers are very strong at pinning. Once they have you flattened out it will be very difficult for you to maintain your guard. I have seen too many BJJ practitioners attempt to play a lazy half guard against wrestlers only to be quickly flattened out and then promptly have their guards passed.

If you are playing guard against a wrestler you need to have very active hips. You need to use constant movement to prevent a wrestler getting control of your hips before they move higher up your body before eventually they have you pinned. You need to be constantly unbalancing them and attacking to prevent them from establishing control over your body. If a wrestler gets control over your hips your guard’s days are numbered and it won’t take much for you to give up a pass.

What Is The Best Guard To Use Against A Wrestler? A personal favorite set up of mine is to pull guard, shoot my legs between my standing opponent’s legs, shoot hips up and establish single leg x. Then from single leg x hook the free leg and turn my hips explosively to the leg I have locked up. Your opponent should come crashing down to the mat. From here you can attack an outside heel hook. A wrestler will be unfamiliar with the position and it won’t take much before they are quickly feeling their knee tearing and are panic tapping against your body.

Wrestlers can be very tough to compete against as they are very athletic and have great grappling instincts. If you aren’t careful a good wrestler will quickly take you down, pass your guard and have you trapped in side control. To beat a wrestler don’t be ashamed to sit guard to neutralize their takedown ability and learn to become a neck and leg hunter.

Wrestlers are susceptible to both chokes and leg locks. Look for guillotines when a wrestler shoots a head outside single, triangles when they try to pass your guard head first and leg locks whenever you can get your body underneath them. By looking for these submissions your success should increase greatly the next time you roll with a wrestler.