There are two types of Sambo, Sport and Combat Sambo. Sport Sambo is a Russian grappling based martial art where the goal is to control your opponent through throws, hold downs and submission locks. Combat Sambo is the same as Sport Sambo but includes strikes (punches, kicks, knees and headbutts). You have probably been introduced to Sambo by Fedor or Khabib and now you want to know more about the sport that helped produce two of greatest MMA fighters of all time. Sambo athletes wear a jacket similar to a Judogi with short athletic shorts. Whereas wrestlers wear a singlet. If you are modest about your body you will think the Sambo uniform is better as it covers your body much more than a wrestling singlet. A wrestling singlet leaves little to the imagination. On the other hand if you are a bit vein and want to show off your body in all its glory you may prefer the wrestling singlet.

The fact that Sambo athletes wear a jacket makes Sambo better than wrestling in terms of self defense during winter. Many wrestling takedowns can be neutralized by establish a strong on the jacket. If a Sambo athlete establishes grips on a wrestler’s winter coat they will be in a very advantageous position. The wrestler will be unfamiliar how to neutralize and counter those grips. While the Sambo athlete will know exactly how to use those grips to manipulate, throw, pin and submit the wrestler. 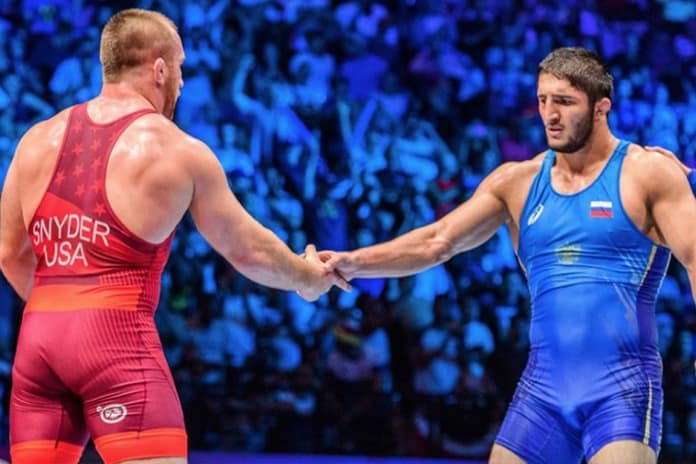 What Are The Similarities Between Sambo And Wrestling? In both Sambo and wrestling athletes receive points based on their ability to takedown their opponents. The bigger the amplitude of the takedown the more points the athletes score.

What Are The Differences Between Sambo And Wrestling? In Sambo the athlete’s jacket is a major focal point. Athletes use the jacket to control, throw, pin and submit their opponents. Sambo places a large emphasis on establishing grips on the jacket and on techniques which require a jacket to work. In wrestling athletes do not wear a jacket and are not allowed to grab the clothing of their opponent. This is why you see far more leg attacks in wrestling than in Sambo.

The match length and structure is slightly different between Sambo and wrestling. A typical Sambo match lasts for 5mins and has 1 period. Whereas a wrestling match lasts for 6 mins and is made up of two 3 min periods with a 30 sec rest between the two.

In Sambo an athlete can win with a powerful throw that results in their opponent landing flat on their back like in Judo. This is not possible in wrestling. In wrestling that type of throw will result in 5 points. In wrestling you can win by pinning for your opponent’s shoulders on the mat for a few seconds. In Sambo a pin will only result in points being awarded.

Is Wrestling More Popular Than Sambo? Is wrestling more popular than Sambo? Wrestling is far more popular than Sambo. Wrestling is an Olympic sport which has a history dating back thousands of years. Sambo is relatively new sport which was invented in 1938 and is only widely practiced in the former republics of the Soviet Union. It is estimated around 50,000,000 people train wrestling while only 1,000,000 people train Sambo.

Wrestling is an Olympic sport which is practiced extensively in many countries. Wrestling is shown on TV and has attracted sponsorship from major brands such as Nike, Adidas and Asics. Famous wrestlers such as Jordan Burroughs have built up large social media followers and have become wealthy from sponsorship deals. In many countries due to wrestling’s Olympic sport status athletes are paid significant salaries so they can train full time. Wrestlers in Russia are given an apartment in their home city, paid a high salary and are given big prizes such as Mercedes cars and Rolex watches for winning medals at international competitions.

Sambo is not an Olympics sport and is not practiced widely. Sambo is not shown on TV outside of Eastern Europe and has not been able to attract big sponsorship deals from international brands. Sambo athletes have not been able to build huge followings online. Many Sambo athletes receive little to no funding and most have to work while attempting to chase their Sambo dreams. If your goal is to be a professional athlete than wrestling is a much better sport to pursue.

Is Sambo MMA? Combat Sambo is very similar to MMA as it combines wrestling, submissions, boxing and kickboxing. Athletes are able to win by points, knockout or submission. It has been called amateur MMA as the matches last for a single 5 minute round and the athletes wear a boxing headgear. The main difference between MMA and Combat Sambo is athletes wear a jacket and there is a limited ground game.

Combat Sambo was designed to be used by the Russian military and split away from Sport Sambo. Combat Sambo began holding competitions in 90s in Russia and has since across the world. Two of the most famous Combat Sambo athletes are Fedor and Khabib. Both of these athletes have played a large role in the growing popularity of Combat Sambo.

One interesting difference between Combat Sambo and MMA is that headbutts are allowed. Even though athletes wear headgear when they compete you can still find matches where fights end in knockouts via headbutts. Also you will see fights where athletes grab the jacket with one hand and strike with the other which resembles a hockey fight.

There are a few issues with Combat Sambo. The jacket that athletes wear do change the dynamics of the fight. Athletes use the jacket to set up takedowns and strikes. The jacket is very important in establishing control over your opponent. In MMA there is no jacket so if you train Combat Sambo you could spend a lot of hours training techniques which rely on a jacket only to transition to MMA and not being able to use those moves. Combat Sambo is a niche sport which is only popular in the former republics of the Soviet Union. If you are not from one of those countries you may find it difficult to find high level Combat Sambo training. This lack of high quality training will affect your preparation for MMA.