In this article we are going to explore all things Abdulrashid Sadulaev who at the age of 25 is already one of the best wrestlers of all time. We are going to look at how this great wrestler trains, what he eats, his net worth and so much more. Let’s get started! 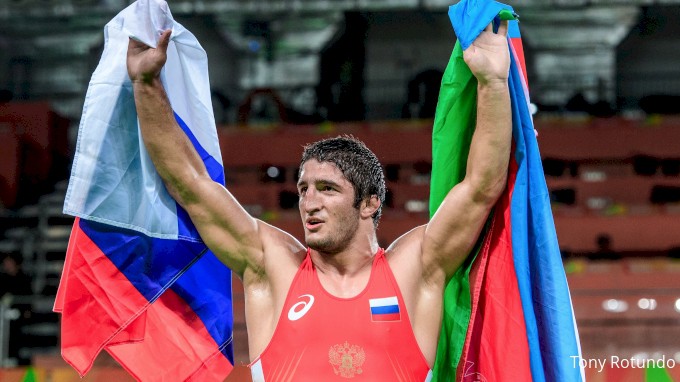 Where Is Sadulaev From?

Sadulaev is from the village of Tsurib in Dagestan which is located in Southern Russia. Tsurib is a mountainous village with just over 2000 people and is 180km from the capital of Dagestan, Makhachkala.

Sadulaev like many top wrestlers from Dagestan grew up hard and tough in one of the many mountainous villages that are located in the region. Sadulaev spent his early formative years in Tsurib going to school, performing manual labor in his home and of course training wrestling at the local wrestling club.

Dagestan’s mountain villages have always been a breeding ground for wrestlers due to Dagestan’s societal structure. In traditional Dagestan society was split into highlanders (people from mountain villages) and lowlanders (who would farm and live in bigger towns).

The highlanders would spend all their time up in the mountains herding and raiding, without much other forms of entertainment one of their biggest pass times was wrestling. This tradition has continued to this day and Sadulaev is just another example of a tough highlander wrestler.

How Old Was Sadulaev When He Started Training Wrestling?

Sadulaev was 13 years old when he first started training wrestling. It is common in Russia and former Soviet countries to start wrestling between the ages of 10 and 13. Sadulaev was a natural and immediately begun defeating his peers. Americans may be shocked to find out that many of Russia’s world champion wrestlers didn’t step on the mat until they were after the age of 10. The Soviets, who invented the modern discipline of sports science came to the conclusion that the ideal age to start training an athlete in their specialized sport is around 10 and that serious training shouldn’t start until 14.

The Soviets conclusion was that by delaying training until the athlete is 10 you decrease the chance of burnout and injury. Also the older child possess adequate levels of physical and emotional maturity to handle the sport.

How Does Sadulaev Train Wrestling?

Sadulaev trains wrestling 6 days a week with each session lasting for 2 hours. 2 to 3 days a week he will train twice a day while the other days will be a single training session. On his only rest day he will stretch or go for a jog to keep his body moving. As a child Sadulaev was placed under a strict training regime by his father and his local coach. Sadulaev would train 6 days a week and workout in the morning before school and then in the evening. His father was extremely strict with Sadulaev and would also insist on him performing manual labor around the house.

Once Sadulaev was a teenager he moved to Makhachkala to find more experienced training partners because nobody in his tiny village of 2000 people could compete with him. In Makhachkala he begun training at the prestigious Gamid Gamidov Wrestling Club. At this club Sadulaev learnt under the watchful eye of Shamil Omarov and made huge improvements. Sadulaev lived far away from this gym and would have to travel 1.5 hours each way to get there. Just 3 years after moving to Makhachkala, Sadulaev would win Olympic gold.

At the Gamid Gamidov Wrestling Club Sadulaev was put through the classic Dagestan wrestling training program.

Training always started with a 30 minute warm up which would involve:

After the warm up Sadulaev would drill with a partner:

Then the coach would demonstrate techniques and Sadulaev would practice them:

During this phase of training all the wrestlers would gather around and watch the coach demonstrate new techniques. Sadulaev would then practice this demonstrated technique against his partner. The coach would provide critiques and then show additional moves.

After technical the coach would tell the wrestlers to get into certain positions and then Sadualev would compete and wrestle live in this position. For example Sadulaev would start in the front headlock position and if he scored or his opponent escaped they would reset in the same position. This portion of training would often last for 15 to 20 minutes.

After positional sparring Sadulaev would then have training matches against his teammates. The number of matches would vary depending on the intensity of the training and where they were in the training cycle. It was typical to have 2 to 4 matches per session.

Cool Down and physical training

Sadulaev, rarely lifts weights and prefers to focus on classic wrestling exercises such as resistance bands, pullups and rope climbing. However, in recent years the Dagestan wrestling has been incorporating circuit training into their regime which includes moderate weightlifting. Sadulaev has stated that he is not a fan of weightlifting. He said it makes wrestlers slow and stiff. He said wrestlers should only lift weights if they have a lack of power but said fortunately he never has had this problem.

Instead of weightlifting Sadulaev prefers to use resistance bands which he uses to work his legs, shoulders and back. Sadulaev is also a fan of rope climbing and pull ups.

In recent years the Dagestan wrestling team who Sadulaev trains with year round have started implementing circuit training workouts into their regime. These workouts are similar to Crossfit workouts and involve plyometrics, cardio and weightlifting. You can see an example of Team Dagestan’s circuit training below:

What Does Sadulaev Eat?

Sadulaev has often talked about his love for Avar Khinkal which is the national dish of Dagestan and holds a special place in the heart of many people. Sadulaev loves meeting up with his relatives and eating Avar Khinkal which plays a central role in family gatherings.

Apart from Khinkal, Sadulaev sticks to basic vegetables and locally grown fruits. He avoids all processed foods and likes to eat how his ancestors have eaten in his village for centuries.

What Weight Does Sadulaev Wrestle At?

Sadulaev wrestles at 96kg (211 pounds) and is the current and reigning Olympic and World champion at this weight. Sadulaev previously competed at 86kg (189) pounds where he won World titles and an Olympic gold medal. Has Sadulaev Ever Lost?

In his first World Championships at the 96kg weight class after moving up from 86kg, Sadulaev ran into the reigning World and Olympic champion Kyle Snyder who was not only a fully grown 96kg athlete but was known for his ridiculous strength and power.

The match started well for Sadulaev as he was able to use his speed to evade Snyder’s shots and score a counter takedown. However, as the match got into the second period Snyder’s strength and heavy hand fighting started to break Sadulaev. The Russian wrestler began to tire and in the last few seconds Snyder was able to score a takedown and secure the match. This 2017 contest remains the only time Sadulaev has lost.

However, since then Sadulaev has gone on to beat Snyder two times and has looked significantly better then their 2017 meeting. This improvement is most likely due to Sadulaev growing into the weight class and becoming accustomed to the strength of other 96kg wrestlers.

Check Out The Match Here

What Is Sadulaev’s Net Worth?

Sadulaev the champion wrestler from Russia has a net worth of $3 million. His net worth has been built from prize money won from international tournaments, salary from the Russian government and gifts from local businessmen and politicians.

Sadulaev’s skills on the mat have turned the young wrestler from Dagestan into a very rich man especially when you consider the average salary in Dagestan is only around $500 per month. Sadulaev receives a healthy salary from the Russian government which is estimated to be around $60,000 per year and he has been gifted multiple apartments in Makhachkala.

It is unlikely Sadulaev will ever have to worry about money because when he retires from wrestling he will easily be able to enter politics, receive partial ownership of a successful business or receive free capital to start his own business. The financial future of Sadulaev looks very bright indeed.